It is believed that Caunos was the grandson of Apollo. The people of the ancient city of Caunos were famous for their yellow skin and eyes – possibly as a result of malaria? But don’t worry, although there are mosquitos in Dalyan (don’t forget the insect repellent) there is no malaria. At Caunos there are remains of an Acropolis surrounded by city walls, a theatre, four temples, and a Roman Baths. A local oarswoman will row you across the river where you can stop off for pancakes and lemonade. Then a fifteen minutes walk to the ruins, so best not to go in the heat of the day. Watch out for tortoises on the way. 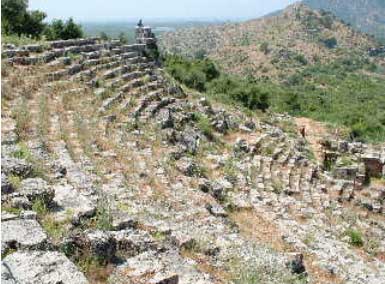 The tombs, carved in the rock are the resting place of the Kings of Caunos. A steep climb brings you in touching distance and a magnificent view of Dalyan and the river. They are lit up at night and form a romantic backdrop from many riverside restaurants. 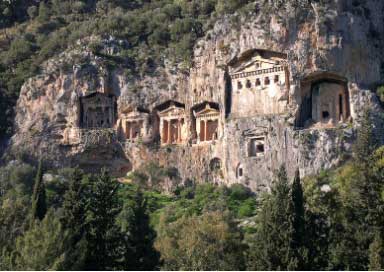 There is an excellent view of the tombs from Cumali House. Sitting out on the terrace with a glass of wine in hand is the perfect end to a perfect day.